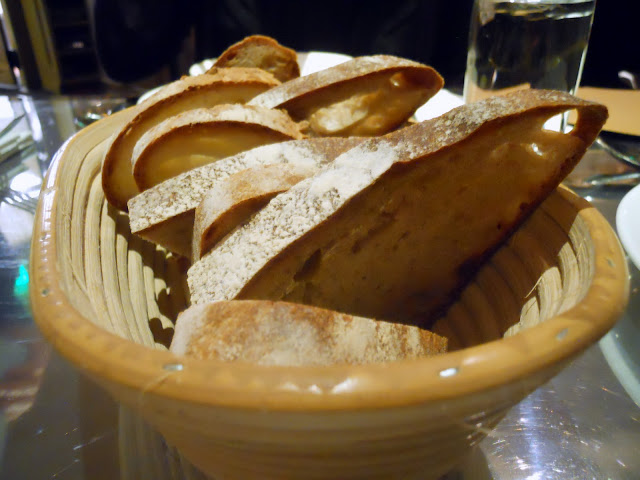 After a long day of roaming around Napa and tasting some very fine wine, we were ready to get our grub on at Ad Hoc to continue our Thomas Keller eating trip. At one of our stops before dinner, the guys at Elyse Winery looked up our meal for the evening and told us if we finish our food, we could always get more. We didn't really know what that meant. EHK wanted to ask if it was an all-you-can-eat. We knew it was a set price for the dinner but didn't know what we were getting ourselves into portion wise.
Upon arrival, we were greeted with a vastly different atmosphere from dinner the previous evening at The French Laundry. Where The Laundry was formal without being too intimidating, Ad Hoc was on the opposite end of the spectrum and trying to be very casual from the way the food was served family style to the way the staff was dressed.
A glance at the evening's menu revealed a very Spanish or Latin inspired menu. The first dish to come out was an albondigas soup. It was a very nice treat to be getting some vegetables from the Laundry's garden in this soup. There was some inconsistencies regarding doneness of the meatballs. Some were a little under and some a little over so my dinner party had different reactions to this dish. I enjoyed the abundance of saffron and al dente rice at the bottom of the fragrant broth. It was actually quite soothing and perfect for the chilly temperature.
I was actually already satisfied after the soup as it was a more than generous serving. The next dish came out and I was feeling overwhelmed. Lamb was nicely seasoned and enjoyed the way the potatoes were prepared but it was just too much for me. I think I only had 1/3 of the portion I was suppose to eat.
The real star of this dish was the slow cooked egg yolk. Looks like a raw egg yolk right? Wrong!!!! It's an en sous vide egg yolk. When broken it slowly spreads out into a thick custard much like the consistency you would get when you break a nicely poached egg only except this consistency is all the way through.  This custard coats the other elements of the dish in its yolky goodness and just adds that touch of richness. I've become a huge advocate of en sous vide egg yolk because of this dish. Now... if only I had the equipment and time for such a decadent preparation.
By the time this came out I was already bursting. Thank goodness it was a rather small serving. I would have preferred to skip the beets as it tasted rather plain to me. The cheese tasted delicate and slightly nutty. Good thing it wasn't overpowering or else I'd only be able to take a bite of it.
What makes a basque cake... basque? We were told it's made with a layer of pastry cream. Mmm... what a genius idea. The flavors of the cream seemed to permeate throughout the cake and made the overall cake very moist. I honestly didn't really taste the gastrique but enjoyed the pairing with the grapefruit.
So would we have been ready for more food if they brought it out? Uhm... no! The servings are so generous. I think this is a great option if you find yourself in the area wanting some Thomas Keller food but don't want to drop the $$$ at The Laundry or can't get in. I know its a different concept but I actually really enjoy the homey relaxed feeling of eating a family style meal... though elevated.
-
Ad Hoc
6476 Washington St.
Yountville, CA 94599
(707) 944-2487
http://www.adhocrestaurant.com/
Posted by Liz