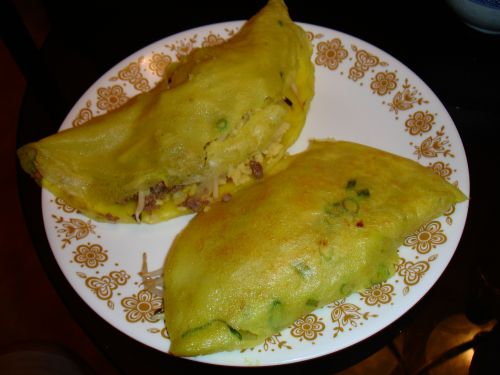 The other day I had the craziest craving for bahn xeo. I’ve had it at a few places in San Diego before and none have lived up to my standards. I grew up on Viet food and bahn xeo is one of my favorites so my mom makes sure to make it at least once whenever I visit home. Anyways, I got the crazy idea to make it on my own. I’ve watched my mom make it so many times and it never seemed difficult. Was I wrong….Viet food like most other Asian cuisines is time intensive on the prep time. So there was a lot of peeling, chopping and such before I could actually get to the point of cooking and filling the crepe. So he essential thing for the dish is of course the crepe flour mix which will look like this: 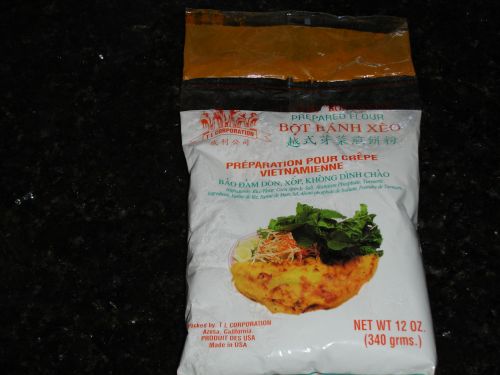 The top yellow orange mixture, the turmeric seasoning is responsible for giving the crepe its distinctive yellow color and taste.
So I vaguely remember my mom’s recipe and I read the back of the package. In the end I mixed the 2 and added some of my own touches.

Filling:
The beans are the toughest part of this recipe. Soak for a couple of hours or else you’ll be stuck wondering why its taking so long to cook. At first I put the beans in a steamer but got impatient with them since I was so hungry so I put them in a rice cooker and filled it the level of the beans with water. This seemed to work just as well since the bean came out soft to taste but wasn’t a pasty mess which was what I’d feared.
For the meat, you start off by sauteing some garlic then throw in a whole chopped up brown onion to sweat. Next the ground meat( my mom uses ground pork but I decided to uses beef this time to see how it’d turn out), break it up into chunks and brown it. When the meat gets close to being all browned, throw in the shrimp. Squirt in to some fish sauce and a dash or pepper and salt. When the mix is cooked you can taste it and add some more fish sauce, salt and pepper to taste if the flavor is too light for your tastes. Lastly, toss in some chopped scallions.

Crepe batter:
Mix the turmeric seasoning with flour mix together. Then pour in 2 cups of cold water, a cup of coconut milk and a handful of chopped scallions. Mix the mixture thoroughly until all ingredients are evenly incorporated.

Assembling the actual crepe:
Pour a small amount of batter on the pan, enough to evenly coat but not too much or it will be difficult to fold later. Cook the crepe until it can easily slide around on the pan, cook some more if you would like it crunchier. Spoon on some beans, meat mixture and some clean bean sprouts on half the crepe. Fold the crepe and you are done. Enjoy by cutting off a piece and wrapping it in a piece of butter lettuce along with some mint and cucumber and dipping it in the sauce.
Posted by Liz No comments: 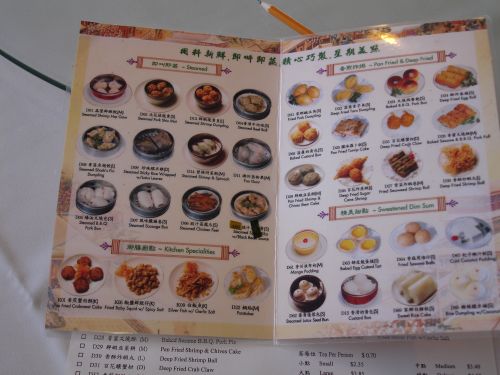 For long time I found the dim sum in San Diego to be quite disappointing. I was nearly on the verge of swearing off ever having dim sum in San Diego due to an experience in Emerald when one of the servers dropped a custard bun in front of us and tried to serve it to us later. We found out that China Max served dim sum and dinner there is pretty good though on the pricey side considering it is Chinese food so we decided to come back for dim sum. The experience here is not the normal dim sum experience at most other places. At first I was turned off by the way they served it since I had it served to me the same way at another place back in the Bay Area and the wait between dishes was so long I was about to walk out and just grab a burger from the McDonald’s next door. Anyways, usually carts are pushed around and you get to pick from the array of trays that pass by. Here, they give you a picture menu and a sheet to mark down your choices and they’ll bring it out. 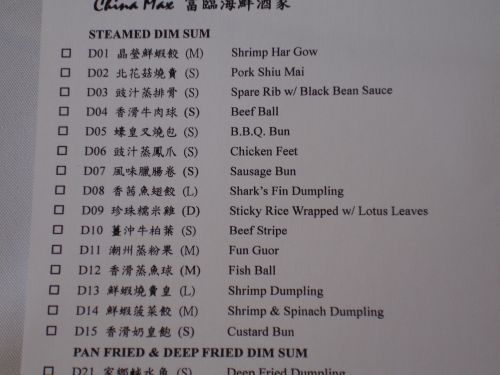 The service as usual was good here and the dishes started coming out in a steady stream.

First came the flaky taro turnovers which is made extremely well here. Well I think pretty much all their dim sum is made well. Even though they only make the popular dishes that people order, all of them taste pretty close to what they should taste like. Getting back to the turnovers, I tend to find that it is a greasy salty lump at most places. Here, the crust is quite flaky and there is a good portion of the meat filling that isn’t too salty. 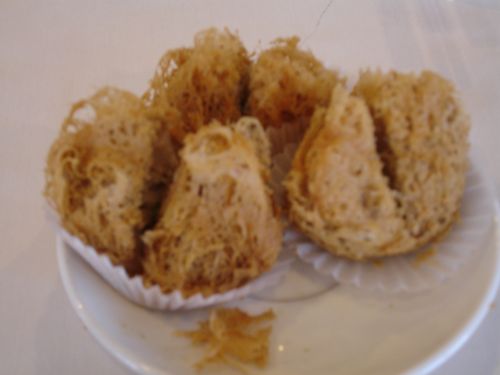 Next, the sui mai which wasn’t bad either. I love condiments and with this dish I drowned it in the chili sauce. 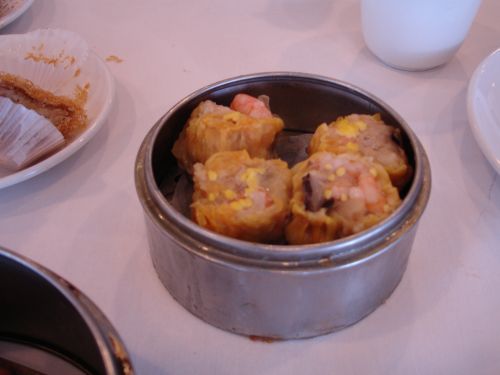 These sesame balls are one of EHK’s mom’s favorites and even though we weren’t ready for dessert she ordered it at the same time anyways just in case they ran out. EHK jokes that never in his experience at dim sum restaurants have they ever ran out. These little sesame encrusted balls have a delicious sweet red bean filling waiting inside. 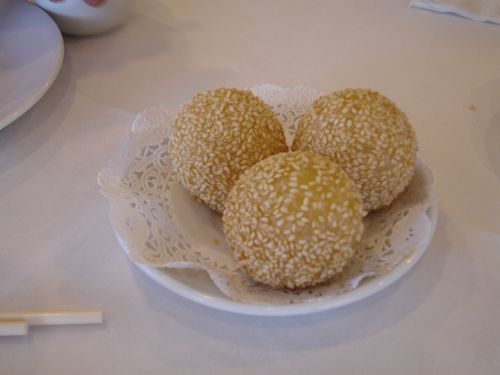 Bbq pork buns came out next. These have long been a favorite of mine since childhood. I remember the excitement of walking into a bakery in Chinatown San Francisco and my parents ordering a dozen or so of these tasty treats which were larger(dim sum to go in Chinatown is usually on the jumbo size) then taking them home to devour them. The honey toped bread with bbq pork filling is combination that I relish and is so reminicent to me today still. 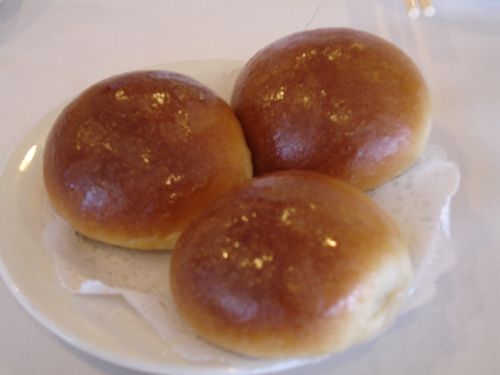 The meat turnovers or hom sui gok was as yummy as all the dishes that came before it as well. Another one of my favorites. I remember my first experience with it was reading a menu and coming across the name and I didn’t know what it was so my dad ordered it for me and I’ve since ordered it anywhere that serves it. The outer crust was perfectly crunchy while the glutinous inside maintained its stickiness. The filling was quite generous as well which is a plus for me. 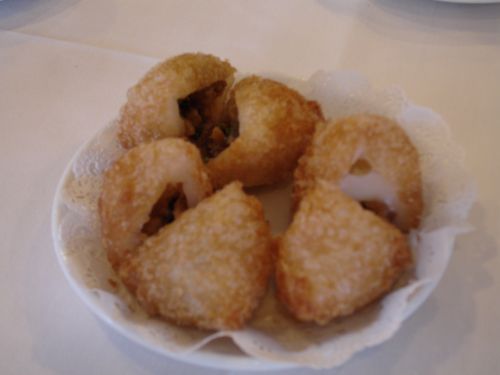 The lotus wrapped sticky rice came out next. I get so giddy when this dish comes out. The fragrant smell of the sticky rice covered in lotus leaf is just too much for me. Inside the rice is a tasty portion of chicken, chinese sausage, mushrooms and egg. 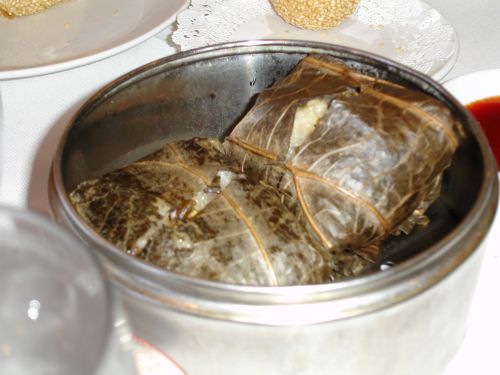 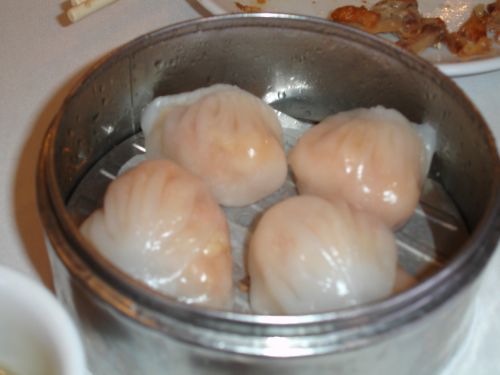 The ha gow(shrimp dumpling) was tasty. I usually base my judgement of the dumpling on the wrapper since it is so difficult to make. Make it wrong and it is a tough inflexible..nearly impossible and quite unappetizing to bite through. If made right it should be soft and pliable and a pleasant experience to eat. 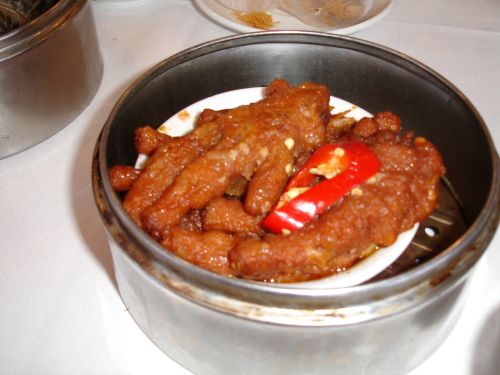 Ahh…the chicken feet finally comes out. I find that this is a dish that most older Chinese people always order and relish with delight. My parents enjoy this very much and so do EHK’s parents. I’ve tried this in different occasion and the texture isn’t bad…its just the little bones that get in the way. I think this is a turn off to younger people or non-Chinese due to the idea of it being chicken feet which is understandable.
-
China Max Seafood
4698 Convoy Street #C101
San Diego, Ca 92111
858-650-333
11am-11pm
http://www.chinamaxsandiego.com/index.html
Posted by Liz No comments:

After a long day of school, work and shopping at Costco I was really craving Peking duck for some reason. I suggested it to EHK and his mom and they were up for it too. So we headed to Jasmine. On this particular evening it was quiet… there was only one other table. We were served our hot tea and iced water as usual while we looked over the menu.

The peking duck was delicious but we were dissapointed that there were only 8 sandwiches(4/plate). Usually they make about 10 or 12.

They then brought the chopped up duck back to us. The theory is that they bring it to the back so they can slice off some meat to use for other dishes such as lettuce wraps. 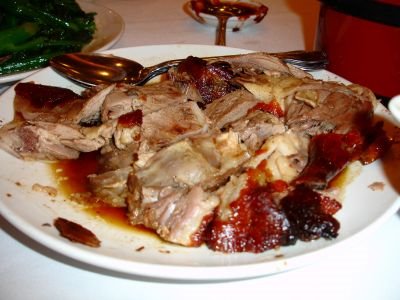 EHK’s mom can read Chinese so she asked for the “Chinese Menu”. The grouper with garlic and mushroom hotpot is one of those dishes that is only on the Chinese menu and not on the main one. If you can read Chinese or go with some who can than you should ask for this menu in a Chinese restaurant as well since there often times items that you can’t find on the other menu. The grouper was quite tender and despite being covered in a gravy type sauce, the breaded crust was still quite crispy.

Chinese Broccoli steamed and lightly sauted with some garlic is one of EHK’s favorites. I like it with oyster sauce but I was already satisfied with the Peking duck. 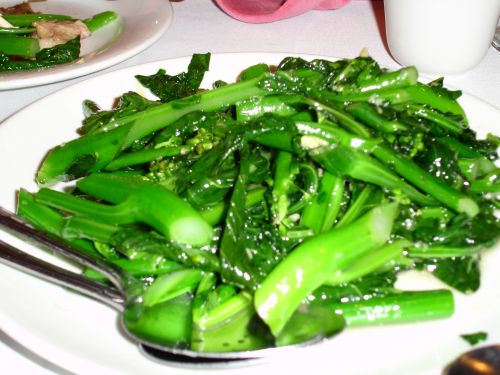 Lastly we were served some sliced oranges for dessert which surprisingly was quite sweet. Jasmine is always a hit or miss…at times the service can suck and other times not bad, same thing with the food.

Lets get this show on the road yah

Hi! So this is my first post. Hopefully this blog will live up to be what I’ve been dreaming about and your expectations. Of course it’ll take some time to build up my tasty food finds adventure so come back frequently to check my updates. As stated in the “About Me” page I’m starting this out of my dissatisfaction with entertainment guide suggestions since it usually seems like they are paid off to say nice things about places when they might not always deserve it. On the other hand, I’ve been encouraged by reading about the food finds of fellow foodies often times uncovering gems that the locals keep hidden away. Anyhow… hope y’all enjoy my adventures!
Posted by Liz No comments: