On a recent trip home, my siblings and I decided to venture into Downtown and check out what was new. Not so long ago, Downtown San Jose was not really a place that people wanted to hang out. However, Downtown has been revitalized over the recent years and now its a hip happening place. 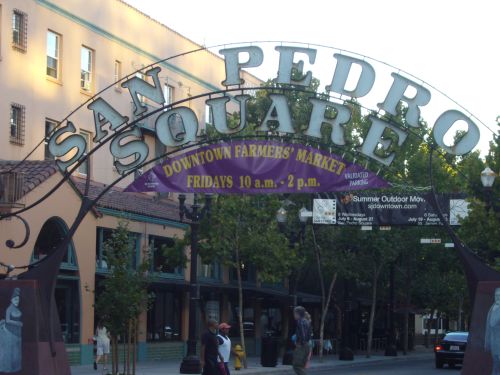 We parked our car and started wandering around, ending up in San Pedro Square which is doted with several restaurants and hosts a weekly farmers market. 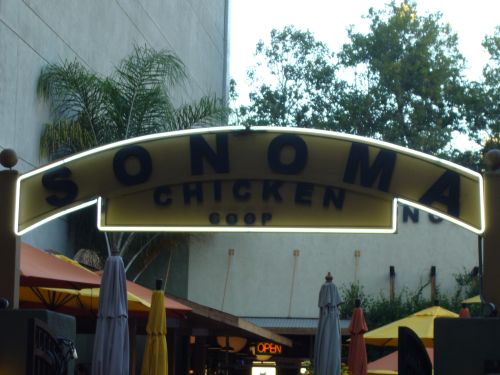 We finally decided on Sonoma Chicken Coop. The name caught my attention and it seemed quite busy. People are always a good sign right? Its an order and pay type of place like Panera. So we checked out the menu, placed our order and was handed a buzzer that would notify us when our food was ready. 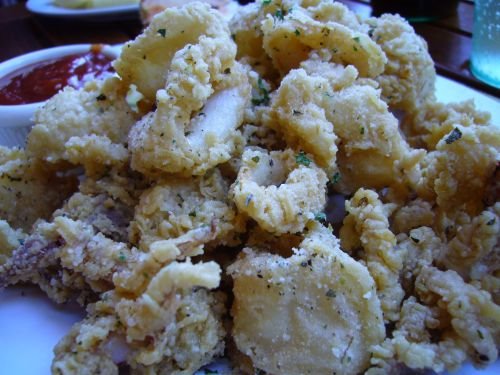 Fried Calamari: I personally was fine without but DV wanted it. It was cooked very nicely... not too chewy. The batter had a nice flavor but it could have been more crunchy. The sauce was a little ... ketchup-y tasting. 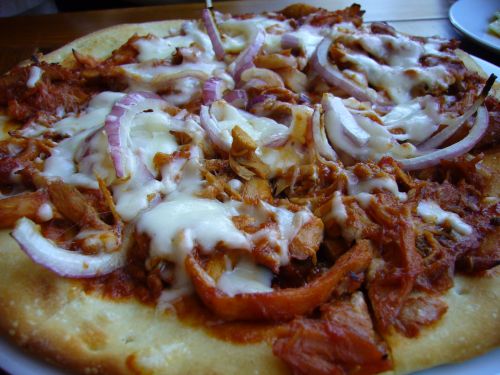 BBQ Chicken Pizza: I'm such a crust fanatic. If the crust is great, you'll find me tearing the crust of the pie and leaving the rest for whoever is eating with me. I didn't really find myself doing that with this pizza. I found the pie a bit saucy... the sauce was bbq sauce and the chicken was drenched in the sauce as well. Sauce overkill! 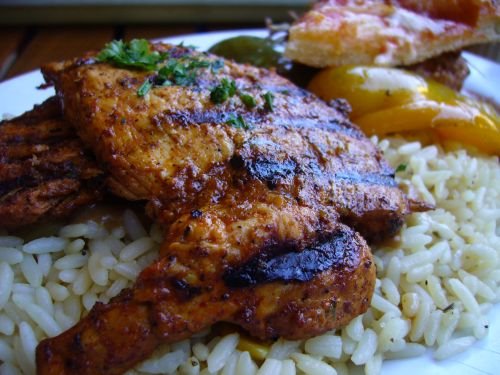 Lime Grilled Chicken: I'm dark meat girl but was pleasantly surprised by the moist juicy tenderness of these boneless chicken breasts. The seasoned rice was very flavorful and a nice compliment to the chicken. Didn't care so much for the leek mashed potatoes or the slice of pizza. 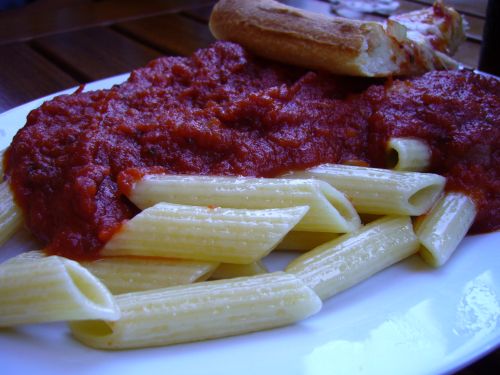 Penne with Marinara Sauce: I can't really say anything bout this as CV totally commanded and destroyed it. Hah! I guess it was good?

The one thing that really annoyed me was that a slice of pizza came out with each entree. If I didn't know the name of this place... I'd think they were trying to sell pizza and not chicken. 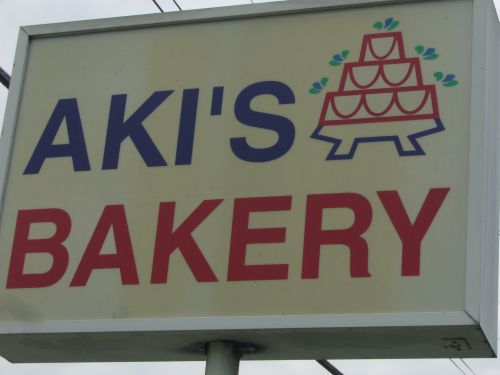 I had heard of Aki's Bakery years ago as it is quite a fixture in San Jose, serving the community since the 1960's. My Honor's World History/ AP US History teacher in high school would rave about and of course I remembered to add it to my "to visit" list. However, I never mentioned it when I was living at home since I figured nobody at home would be down for venturing away from the Chinese style cakes they were so familiar with. Recently I felt my family became be more open to venturing into new styles of cakes so I suggested it and it was an emphatic go. 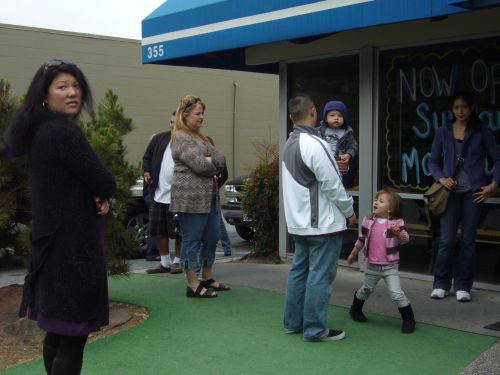 DV and I arrived bright and early before opening but as you can see... there were others anxiously awaiting to grab some goodies. Parking is very limited in the front to street parking so we decided to park in the back where there was plenty of parking since we were driving the parents' shiny new car. 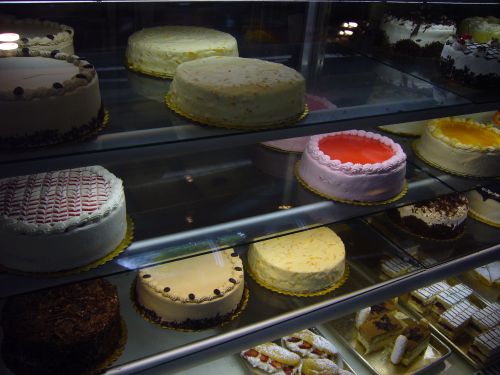 Once we were in, we were overwhelmed by the choices. Look at all the cakes! All so pretty and yummy looking. We managed to be first in line and considering there were several patrons waiting behind us, we decided it'd be wise to not step out and wave people on. So we stepped up to the counter and the attendant was great at helping us to find the cake we were looking for. Specifically we wanted a cake low in sugar yet wasn't plain tasting and the signature guava cake was recommended to us. 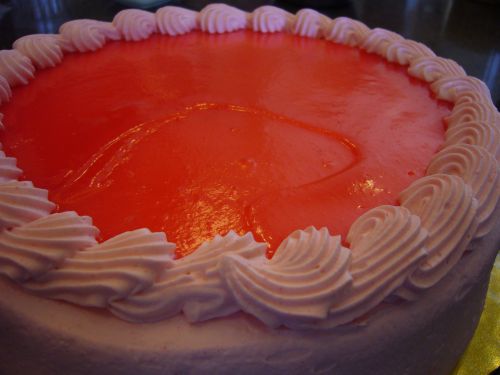 This pink treat consists of two layers of guava chiffon cake, filled and iced with guava whipped cream and topped with a light guava puree. The attendant said it was imperative that we put the cake back in the fridge if weren't going to eat it within the hour so we did as we were saving it for after lunch. 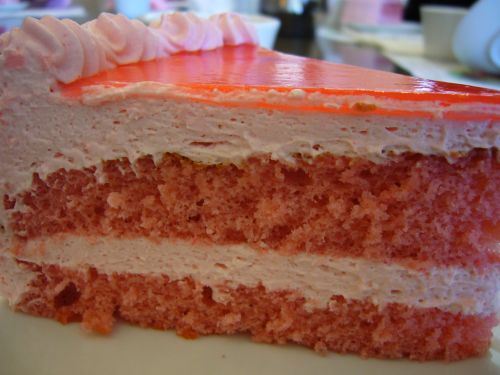 Check out that slice! The cake layers were light and fluffy... and had a delicate guava flavor. I'm such a fan of whipped cream as it is airy...making it less of a guilt trip to consume than butter cream or cream cheese frosting. This whipped cream icing was no different and again lightly flavored with guava. When I first saw the guava puree, I was a little skeptical that it wouldn't be overly sweet. But it really wasn't and provided a lovely different texture to the cake.
-
Aki's Bakery
355 Meridian Ave.
San Jose, CA 95126
(408)287-5404
www.akisbakery.com/Welcome.html
Posted by Liz 3 comments: