Many a times have a been down in Little Italy and passed by this English pub surrounded by mostly Italian restaurants. Then I heard from a former coworker that this was a must visit place because of the fish and chips. I needed some de-stressing from finals on this particular trip so I brought Angie along to try out this place and of course trade our latest stories of the drama going on in our lives. Girls+food=always trading stories. So we both decided to try the fish and chips which according to the menu was “San Diego’s Best”. It was a little pricey…close to $15 for 3 pieces of battered fried cod a generous amount of fries and a small side of coleslaw. Overall the fish wasn’t too greasy, had a good flavor and crunch to it. However the fries seemed a little soggy and neither I or Angie were impressed with the coleslaw. 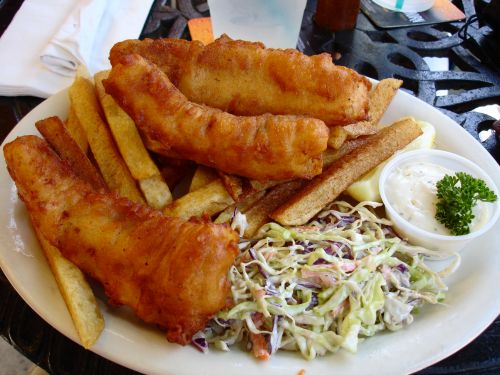 Unfortunately, Princess Pub doesn’t offer takeout boxes so make sure to bring your appetite with you.

So I was checking out Kirk’s food blog(mmm-yoso) and came across a Vietnamese place in El Cajon named Nhuy-K. Funny thing, we didn’t end up eating at that place since we were driving along the Boulevard and saw Saigon with a brightly colored neon sign and a packed house. We decided to ditch our previous plan and try this place out. The interior was quite cavernous and in typical Vietnamese restaurant style, there were many neon signs/lights on the windows. What caught my eye was the bahn xeo on the menu. As I have stated in some previous entries, the bahn xeo is my bench mark for weather I decide to come back to a Vietnamese place (if they have it on the menu).

So we started off with an order of spring rolls, a jackfruit shake (for me) and a three bean dessert (for EHK). The thing that caught us my surprised us was the size of the spring rolls…the diameter was like that of my wrist. It wasn’t particularly tasty nor was it not but I didn’t expect it taste fantastic considering it was 9:00 PM. I kind of regretted ordering the bahn xeo now since I was feeling satisfied already.

My fears were confirmed since my order came out and it was absolutely monstrous. Unfortunately the meat was cooked into the crepe which I don’t really like. The good thing was that it wasn’t too oily like at Phung Trang. EHK did some of it though and gave approving thumbs up since it was crunchy, not incredibly oily and the filling wasn’t 99.9% bean sprouts.

His order of the dac biet pho came out and he was equally thrown off by the portion size. He said the pho was decent. I think what’ll keep us coming back here is that its open till pretty late, the prices are reasonable and the portions are gigantic.

On a second trip the following week we decided to try the 7 courses of beef. This time we started off both with coffee shakes which weren’t bad and the egg rolls were piping hot and fresh but not as meaty as I’d hoped.

Thi is probably one of the better setups I’ve seen. Usually its a pan over a little kerosene can.

The first two courses came out which are the marinated and unmarinated beef. I believe that the unmarinated is meant to be boiled in the vineagar broth but we prefer to fry up all the meats in the buttered pan instead. Then wrap it up with some rice paper with the veggies provided.

Next a variety of beef sausages came out. I’m not very fond of them since I feel in essence they are the same course and the the restaurant gets away by making different varieties of sausages.