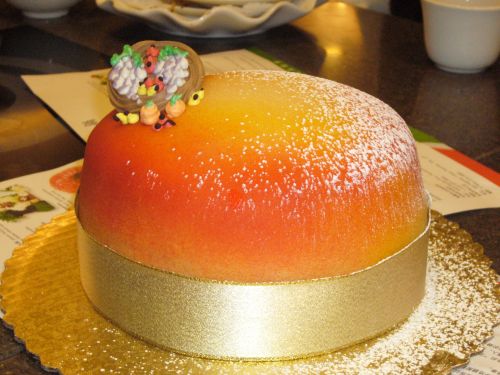 So my sister and I arrived home fairly early and decided to drive out to Santa Cruz to pick up my brother since it was only a 40 min drive South West on the 17. I also wanted to check out this bakery that my family has been raving about out there. So we drive out there and hit the usual commuter traffic since a fair amount of people do live off the 17 and drive to work in Silicon Valley. It turned out to be a longish drive and I was not a happy camper to arrive at my brother’s place which he shared with 2 spoiled brats. My brother is a pretty clean dude considering he is a second year and an only boy in my family. Oh geez but the one of the guys left this gargantuan 50 gallon sized hamper of dirty laundry behind for the holiday weekend and I really need not say more since I’m sure you all can imagine. I’m so glad I’m a girl and left dorm living behind 3 years ago.

I was oh so glad to be leaving his dorm to head to Downtown Santa Cruz. I had never walked around downtown even though I had attended numerous summer programs at UC Santa Cruz but I was instantly jealous. This was a pretty chic downtown area which serviced quite a few socio-economic classes other than the ultra wealthy like Del Mar and La Jolla seems to cater to. It was also quite accessible and parking was not outrageous like Downtown San Diego. I spotted a night market… Santa Cruz residents are truly spoiled. I would love it if there were an easily accessible regular night time farmers market where I live. Well we finally arrived at Hoffman’s and start to salivate as I usually do when I see lovely baked goods. We discovered that this is actually a German bakery and has been around for many years. There was that distinct bakery - yeasty smell that lingered in the air… quite common with well established bakeries. Quite a few patrons were dining in the general dining area that night and perusing the show case to see what sweet delectable they would delight in at the end of their meals. The woman that helped us was quite friendly and helpful with suggestions. We ended up walking out with a Princess torte, some German spice breads, a few single slices of their other signature tortes and a chocolate meringue. I only took a picture of the Princess Torte because it survived the devastation otherwise known as my baby sis the next morning.

I convinced my parents to save the cake for Thanksgiving dinner which was only the next day and we did. We had dinner at Little Fat Sheep in Fremont since the kitchen is still going through a major overhaul. Dinner was so good that my parents asked for to-go cups to take the soup home. However, the cake was the true star of the show that night. Everybody, the people siting around us and the waiters couldn’t help but keep on admiring how beautiful the cake looked. If only they knew that this cake tasted as great as it looks. I have never been a fan of marzipan, suppose its because I’ve only tasted store bought marzipan and the one that covers the princess torte is made in-house. The marzipan was soft and lightly flavored, the genoise was airy and fragrant with vanilla. Mmm… there was just a right amount of cream and raspberry jam filling.

If I ever end up having my wedding in the Bay Area I will probably order my cake from here. It was decently priced at $18 for a 6inch, tasted great and looked gorgeous.